Despite working on a wide range of pieces including paintings, sculpture, fine antique furniture, and smaller timepieces. Long-case clocks make up the majority of our work. We work on upwards of 30 clocks annually, and the vast majority of these are either solid oak, mahogany or veneered versions. Occasionally we will see a case with a few sections of decorative inlay, or marquetry.

Rarely do we come across a fine piece that is almost entirely covered in marquetry.

However, recently we have completed restoration on such a piece. We were contacted by a gentleman who required extensive restoration work undertaken on a fine Dutch marquetry long-case clock.

Below you can see some photographs of this long-case clock case being restored in our workshop.
The photograph below shows some of the damage that has occurred to the fine marquetry inlaid door.

Restoration on this fine clock is currently being undertaken by Myles Green, of Green and Cockburn Antique Restoration. 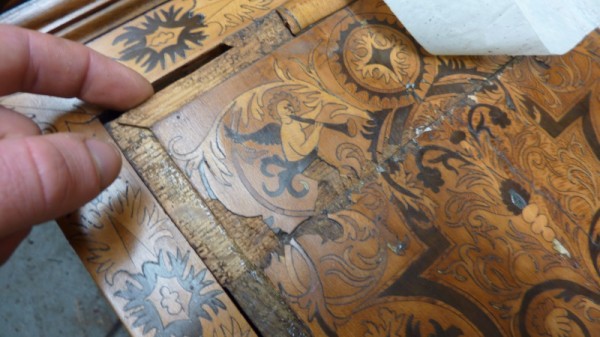 A description of the piece is as follows:

This clock is a fine example of a late 17th century long-case clock, with the characteristic narrow trunk, and sturdy fat base. The case appears to be largely unaltered, apart from the missing bun feet, which would have been present when the clock was made. The clock is covered extensively in fine Dutch marquetry work. The marquetry work is of high quality, and must have been quite an undertaking to complete during this period. Not only is the entire body of the clock decorated with fine marquetry inlay, but no stamps or templates have been used. This can be seen in the slight imperfections in the symmetry of certain flowers and patterns. This indicates that the craftsman, who created the piece, would have had to cut each individual piece by hand, without the aid of pre-made cutters or templates. The design includes two cherubs with trumpets, several small birds, as well as a recurring floral pattern.
The different colours featured in the design have been produced by the utilisation of several different types of veneer. The base-wood on this clock is good quality English walnut. The inlay used is of several different types, including boxwood, rosewood and various fruit woods. The use of several varieties of wood gives a pleasing range of colours, which compliment each other, and adds to the overall beauty of the piece. 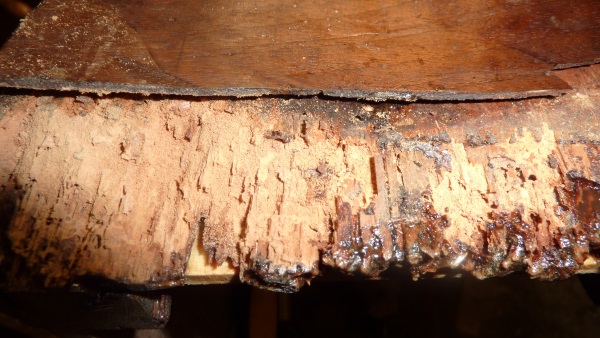 Above, you can see a photograph of the state of the timber underneath the veneer on the clock.

Despite being such a fine example of its type, this clock was sadly in a bad state of disrepair. Many of the joints in the carcass were loose, much of the marquetry work had become detached from the base wood substrate, and the French-polish finish had become worn and discoloured. The first job in the restoration process was to ensure none of the loose, original marquetry, would become dislodged and lost. Masking tape was applied to any loose fragments of marquetry to avoid this, whilst other detached pieces were removed, and labelled for later re-application to the substrate.

The second stage was to ensure the clock case was structurally sound. The loose joints were steamed apart, cleaned, and fresh Scotch-glue applied. After all the joints had been left over night to dry, the case was in a far more manageable state and could be moved around without fear of structural damage.

In addition to the joints on the clock itself, the door was badly damaged. Due to the cleated nature of the door, the joint had distorted over time, and had broken through the top layer of the marquetry. This joint was steamed apart, cleaned and glued back together.

Once the clock was structurally sound, we were able to methodically re-glue the lose pieces of marquetry work. This simply involved cleaning the receiving gap and gluing in the original pieces. Unfortunately however, some pieces of inlay were missing completely. These, of course, needed to be replaced.

In order to replace marquetry shapes, one must first take a tracing paper outline. This can then be used to place on top of carbon paper, which is in turn, placed over the new veneer to be cut.
Once the correct wood for each shape had been identified, we proceeded in this manner, and cut all of the missing marquetry segments. This was certainly the most time consuming element of the restoration project, due to the slow work of matching the gender of wood, grain direction and thickness, along with getting the shape just right.
After all the new pieces of veneer had been cut and glued in, we were able to sand down any remaining discrepancies’ in level, in preparation for French polishing.

k a traditional coating of French polish. We find the traditional method to not only be more appropriate for fine antiques, but also more aesthetically pleasing than the modern trend of spray-coating which will definitely affect the price and value of your item.

The finished project can be seen below: 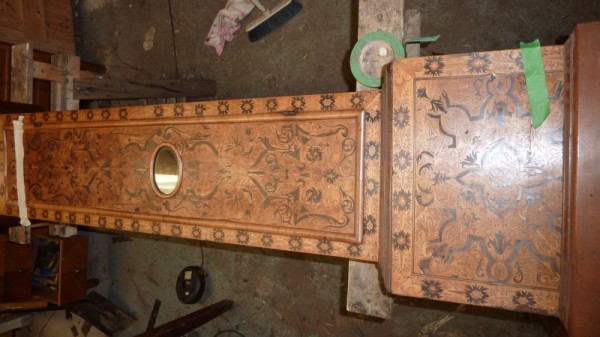 We are an extremely knowledgeable group of restorers and valuers of antiques and fine art, specializing in the restoration of fine antique clocks and fine furniture, based in North Herts serving North London, all Hertfordshire, Cambridgeshire and Bedfordshire villages.

Malcolm Green is a valuer, restorer and consultant for the BBC. Resident clock expert for the Restoration Roadshow and other antique orientated programmes. 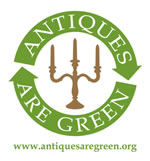 We can also provide services such as antique valuations for probate, inheritance tax or insurance

We at Green & Cockburn are willing to help with any antique restoration project. Please contact us with your antique clocks and furniture restoration problems. Perhaps we can offer help and advice.

Our workshops are situated in the picturesque village of Weston, and Letchworth in Hertfordshire.

If we are called out to a clients premises, we have a small call out fee to cover petrol and time away from the workshop.

For clients who wish to bring restoration items to us please phone to arrange an appointment.