Antique Restoration on Ivory and Items of Interest.

At Green and Cockburn antiques restoration we undertake all sorts of traditional restoration work including the somewhat now days slightly dodgy subject of ivory restoration.
I might add if we are to restore or undertake the restoration of an ivory subject it has to be at least 100 years old.

We are not just Green by name we are Green by nature and the restoration of our ivory items is undertaken using 18th century or 19th century ivory,

In these days of strangeness and social distancing etc trying to avoid viruses, restoration businesses such as ours still seem to be popular, we are still receiving items for restoration by the post at our Letchworth office from around the world,

Below you can see a group that has been very badly damaged and was repaired sometime I believe in the 1920s using a a glue which has now yellowed rather, as you can see there were many parts missing but the client thought it worthy of restoration

These days we use ivory contemporary with the period of the restoration to be undertaken never never new ivory of course and very often we use ivoreene which is a substance made by mixing mammoth tusks as dug up from the tundra and a plastic mix this substance can be carved and used exactly like ivory but of course has never come from an elephant.

For the restoration of the subject below we had to remake missing hands, sections of rope and repair a broken hat all these repairs had to be undertaken in a fashion so that they cannot be observed by the human eye. 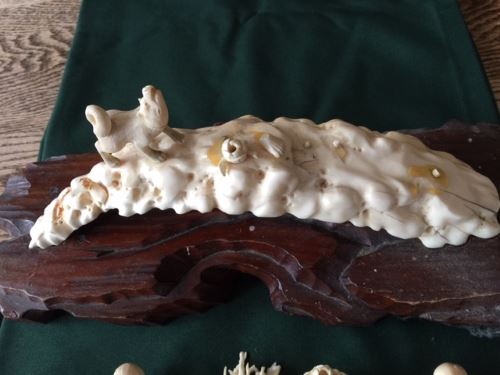 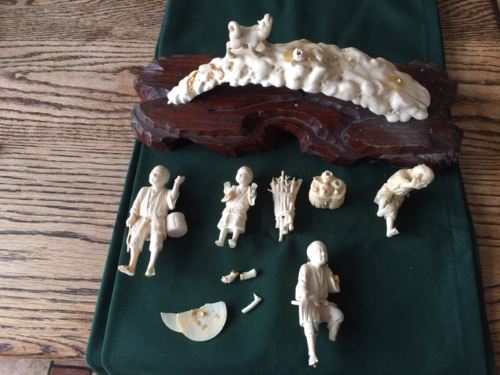 The photograph below you can see the result of the finished carving, twigs from the basket were made hands and feet were made and the subjects were glued to the base. 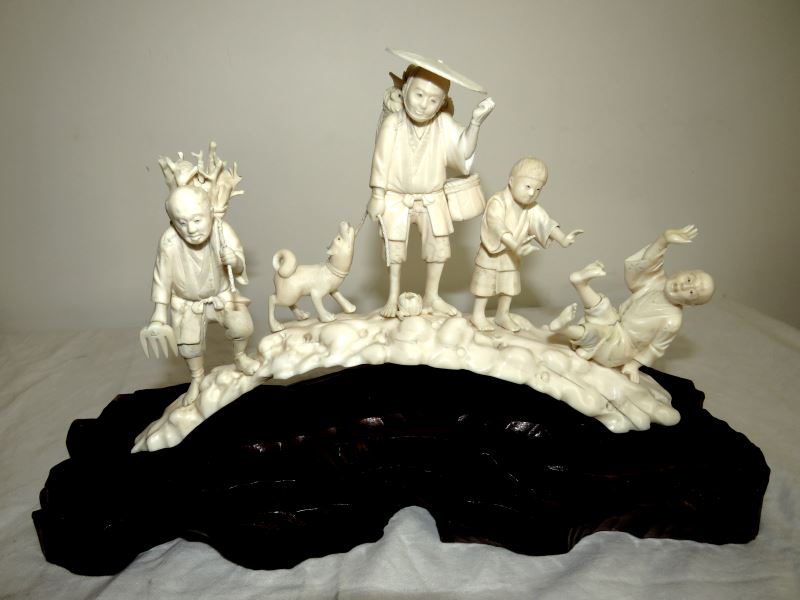 This ivory figure came into our workshop needing to be repaired it had been repaired once before using copydex the figure had to be dissembled completely and missing parts made such as the fan in her left hand. 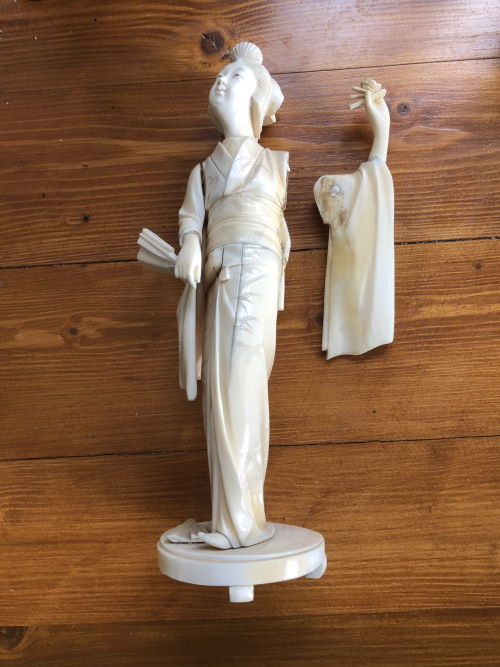 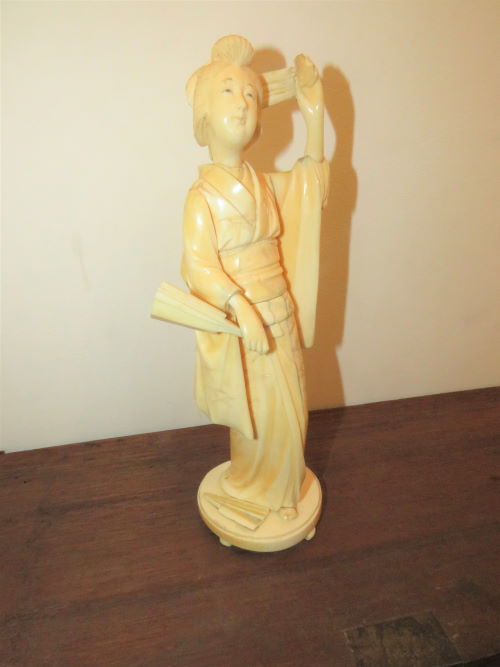 This particular broken ivory Japanese figure came in for restoration as you can see it is rather broken, in the process of restoration we removed a wood screw and lots of old brown hard glue, the client would like it restored but not fully in this particular case as some of the repairs were undertaken by their great grandfather and therefore she would like them left..

Therefore we have undertaken the restoration of the feet and the hands and the staff leaving the hat as was requested. 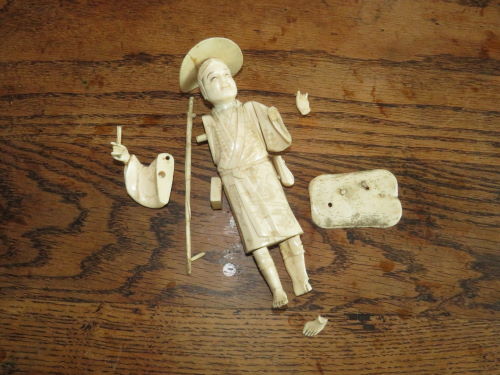 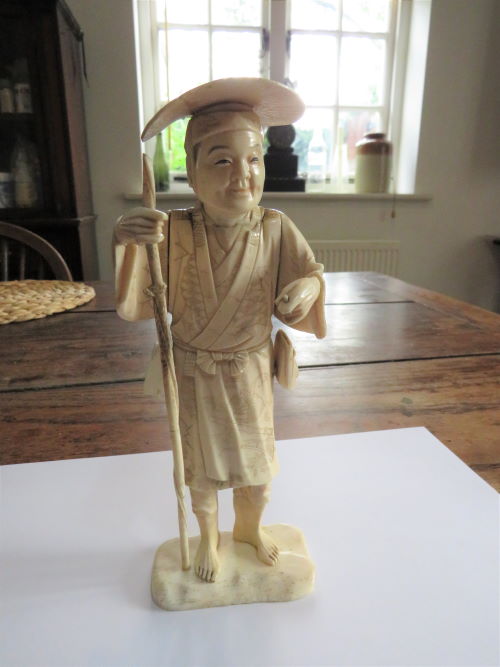 We only use old ivory in such repairs and we only undertake restoration of antique ivory items.

In the photograph below you can see two late edo period ivory pot's circa (1603 to 1868 as you can see they are rather badly damaged.

And in the photograph on the right you can see the top of the pot which has been repaired totally without any sign of damage. 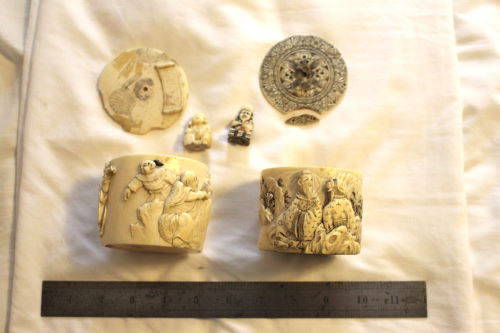 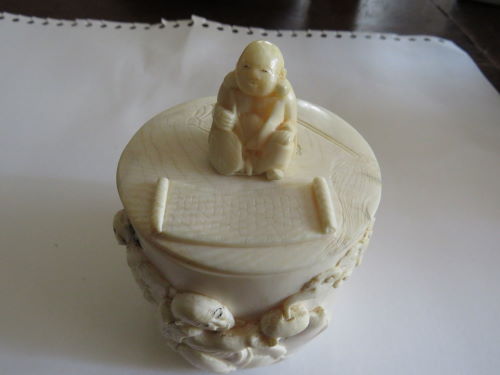 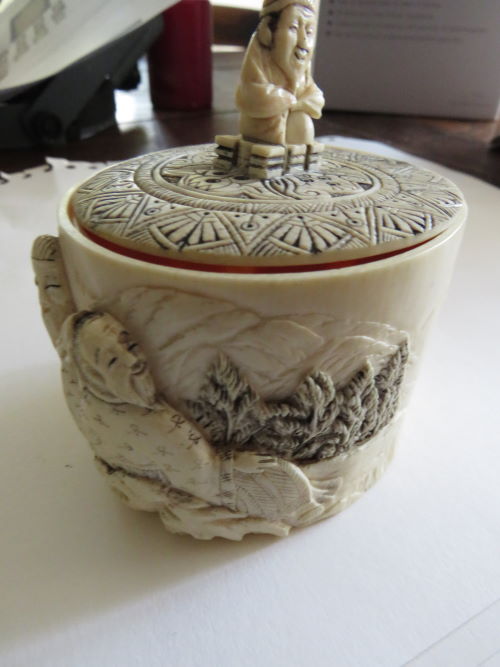 This very fine ivory samurai warrior required the restoration of its katarna and the upper protruding (sode) plates and bow. 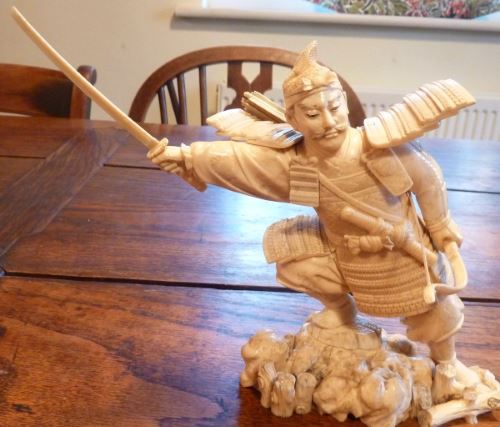 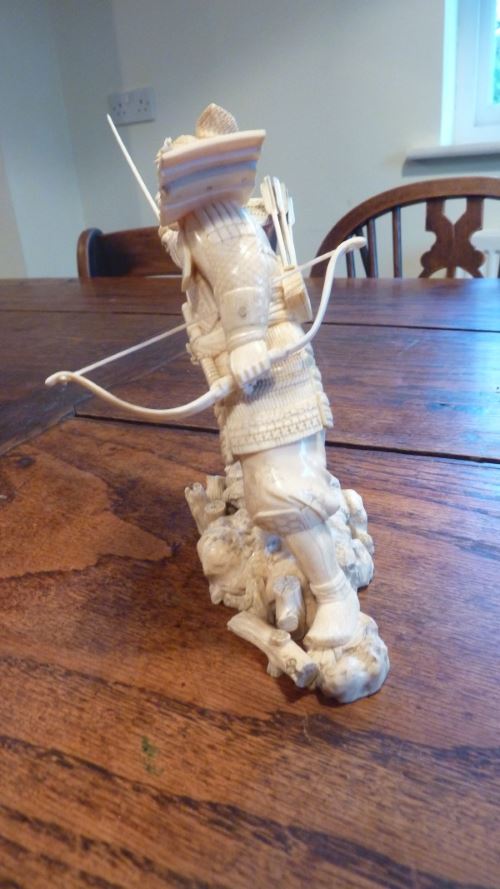 In the second photograph you can see a second view of the bow sode and arrows these items were all restored from very 18th century ivory.

Below you can see a recent ivory carving and repair of a rather unusual Japanese ivory crustacean. 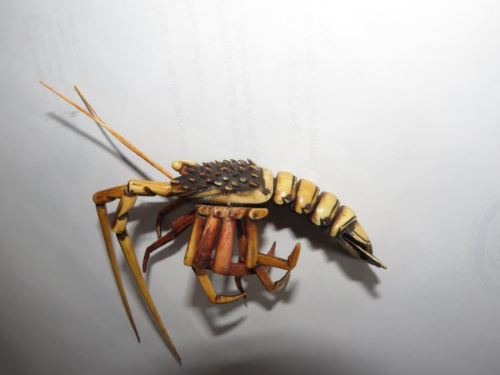 Its legs were broken and its front antenni have been replaced, the restoration of ivory is a little bit of controversial subject at the moment but that is partly because people like Mr Goad don't seem to be aware that the sale and restoration of antique items of ivory will not stop rich people from killing elephants.

Sometimes when a part of the clock is missing and it has to be made either by machine or in this case by the lost wax principle.

If you wish to know how to do this first of all, if you have the broken part, first thing to do is to copy it using latex or silicone rubber otherwise the item can be made by carving the item or copying it in clay.

The ancient Greeks used this principle for copying bronze statues,

For those wishing to see the principal please go to this hyperlink. https://en.wikipedia.org/wiki/Lost-wax_casting

Below you can see the a clay copy and brass part made from the copy using the lost wax principle. 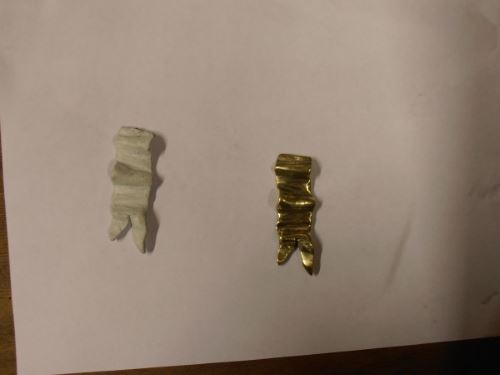 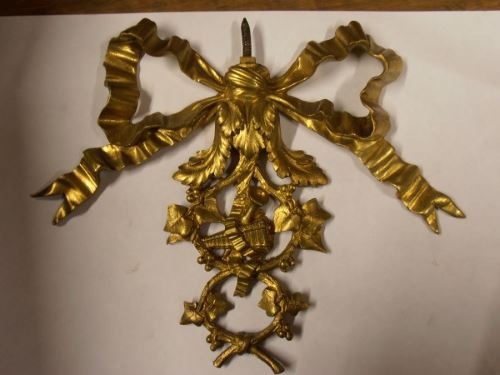 you can see the item incorporated in the swag.

We were asked to undertake the restoration of a fine 18th-century Chinese junk we received a pile of bits with many sections of ivory missing, as ivory is becoming rather a taboo subject around the world, and of course we don't want to see any more elephants killed, therefore we have to be very careful to source old ivory for the restoration work.

Ivory items such as the one you see below generally come from museums and private collections.

Below you can see a photograph of the restored ivory junk. 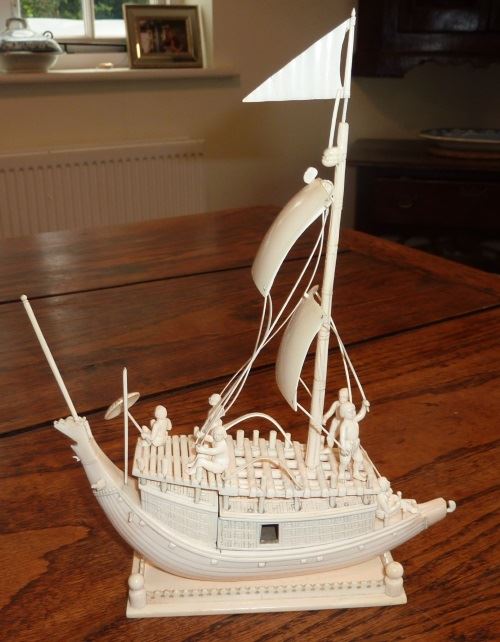 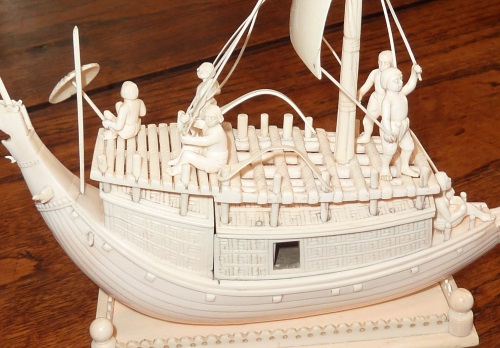 As you can see the detail right down to the grain on the wood of the hull is quite amazing,

This rather fine 14th century Romanesque slate table which would originally have been part of a floor in a rather grandiose Italian villa.

This floor section now though was being housed in a brass surround and used simply as an incredibly expensive coffee table.

The client phoned up rather distressed to say that somebody had dropped something rather heavy on one corner and broken it.

Cutting slate is not very easy to say the least, partly because there are many different layers of strata within one slate piece, these pieces tend to crumble and breakaway when it is cut.

Below you can see the new piece of slate fitted within the table, and on the right you can see a photograph of the completed restoration with all the paintwork using original paint pigmentation and marbling techniques of the period. 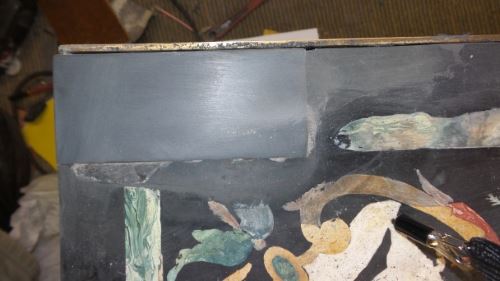 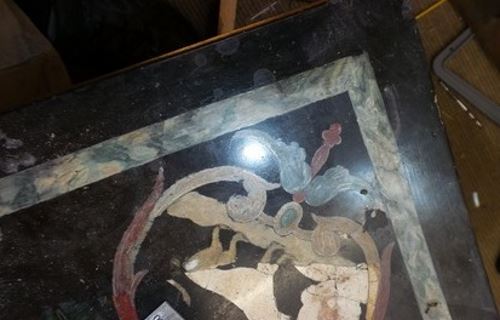 When this table was returned to the client they asked "oh which corner did you do" which is praise indeed because they couldn't tell.

We are sometimes asked to undertake repairs on small ivory items. Unless you can provides us with old ivory that we can use, we will need to use a substitute. Here is an example of a recent repair of a broken ivory figure.

Below is a picture of a Maharaja circa 1800, three inches high missing a hand. 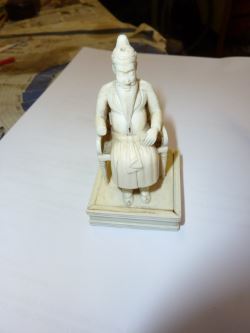 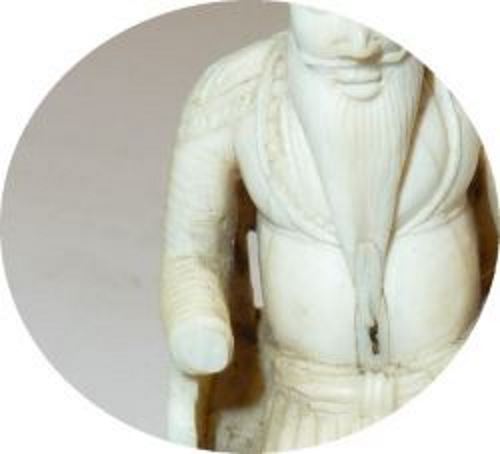 This ivory maharajah was finely carved in around 1800 in India and is of the Sikh religion and is probably Ranjit Singh.

Unfortunately the figure was dropped and the hand broken and lost, we were asked by the owner of this figure to carve a new hand.

This repair was undertaken using an ivory substitute containing bone dust and resin, the carved hand when finished with just over a quarter of an inch long.

Looking for an experienced antiques restorer - contac Myles at Green and Cockburn…
Tel : 01462 790646 or E-mail : enquiries@greenrestoration.co.uk