We repair and renovate clock movements, dials and cases to their original state using techniques contemporary to the age of the antique clock.

We specialise in 17th-18th century clocks, including the restoration of Dutch marquetry longcase clocks. The following video is an example of a completed longcase clock, grandfather clock restoration.


We hold a vast stock of timber contemporary to longcase clocks dating as far back as the 16th century. We also specialise in the restoration of different styles of marquetry work by using timbers which are now unobtainable due to their extinction. We provide all movement parts that can be fitted to the original format of the clock.

Below you can see some of the longcase clocks that have passed through our repair workshop recently - here, you can also see our Antique Clock restoration projects.

A once fine japanned longcase,grandfather clock

Sometimes when a client phones us about a longcase clock restoration they almost immediately assume that restoration is probably not going to be possible, but this always depends on the viability of and the value of the item, meaning that if the item when once restored is far more valuable than the money being spent on it, then it is most certainly worthy the clock in the photographs below was such a case.

This once fine japanned long case clock circa 1770 this clock was painted and japanned in the European style following a rather unusual magician or alchemist theme as one can see from the rather dilapidated art work. in the first photograph you can see which was supplied by the client the hood and rather distressed dial, and in the second photograph the rather distressed state of the trunk door. 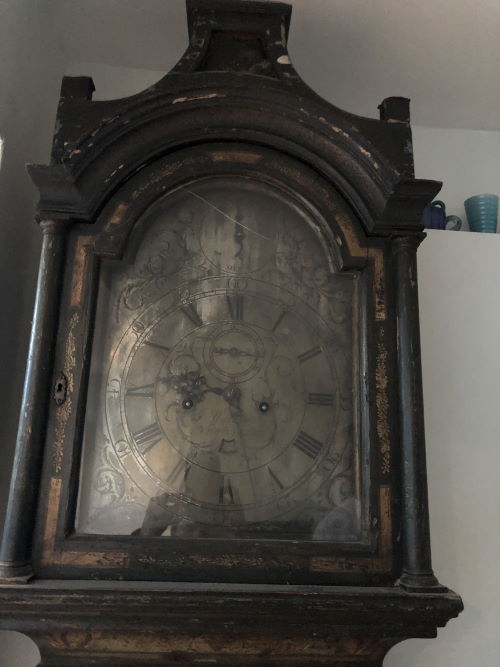 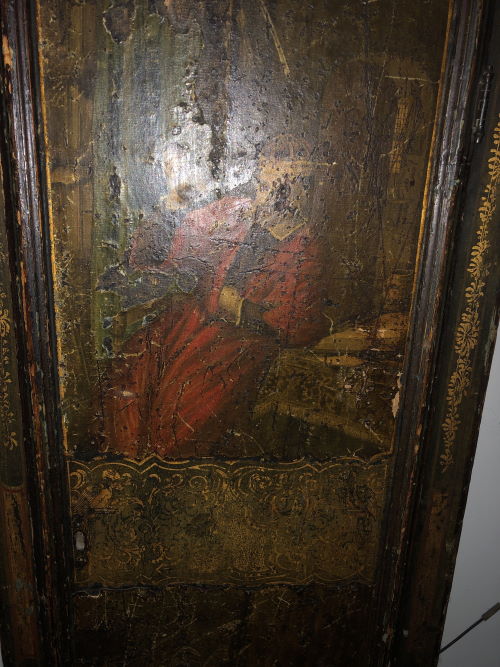 In the next photographs you can see images of the very worn base and trunk of the clock these images are so worn that we had to use specialist equipment to analyse the original japanned work. 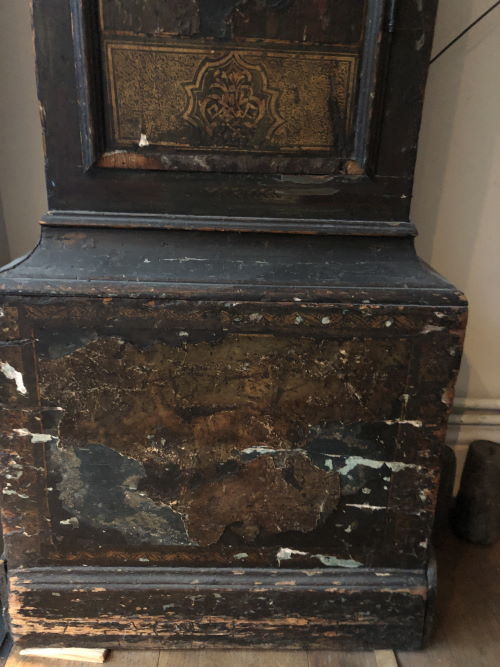 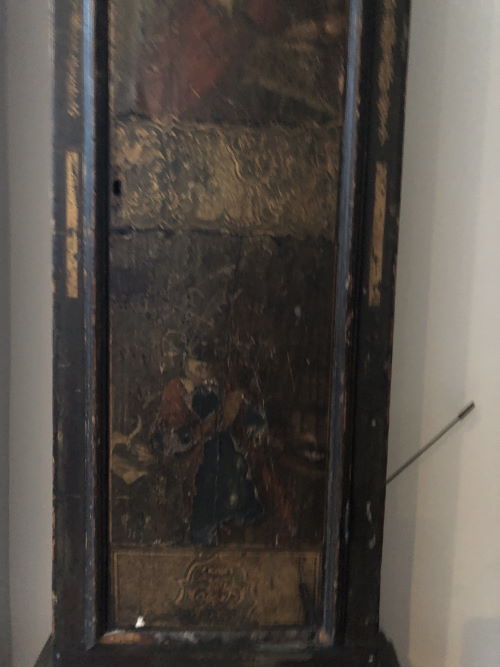 As you can see this rather once worn japanned longcase hood and dial and movement has now been fully restored using 24 carat gold leaf and contemporary pigments, the missing frett at the top was missing and has now been replaced as have all the missing structural components, the artwork has been copied to the original painters specification and design 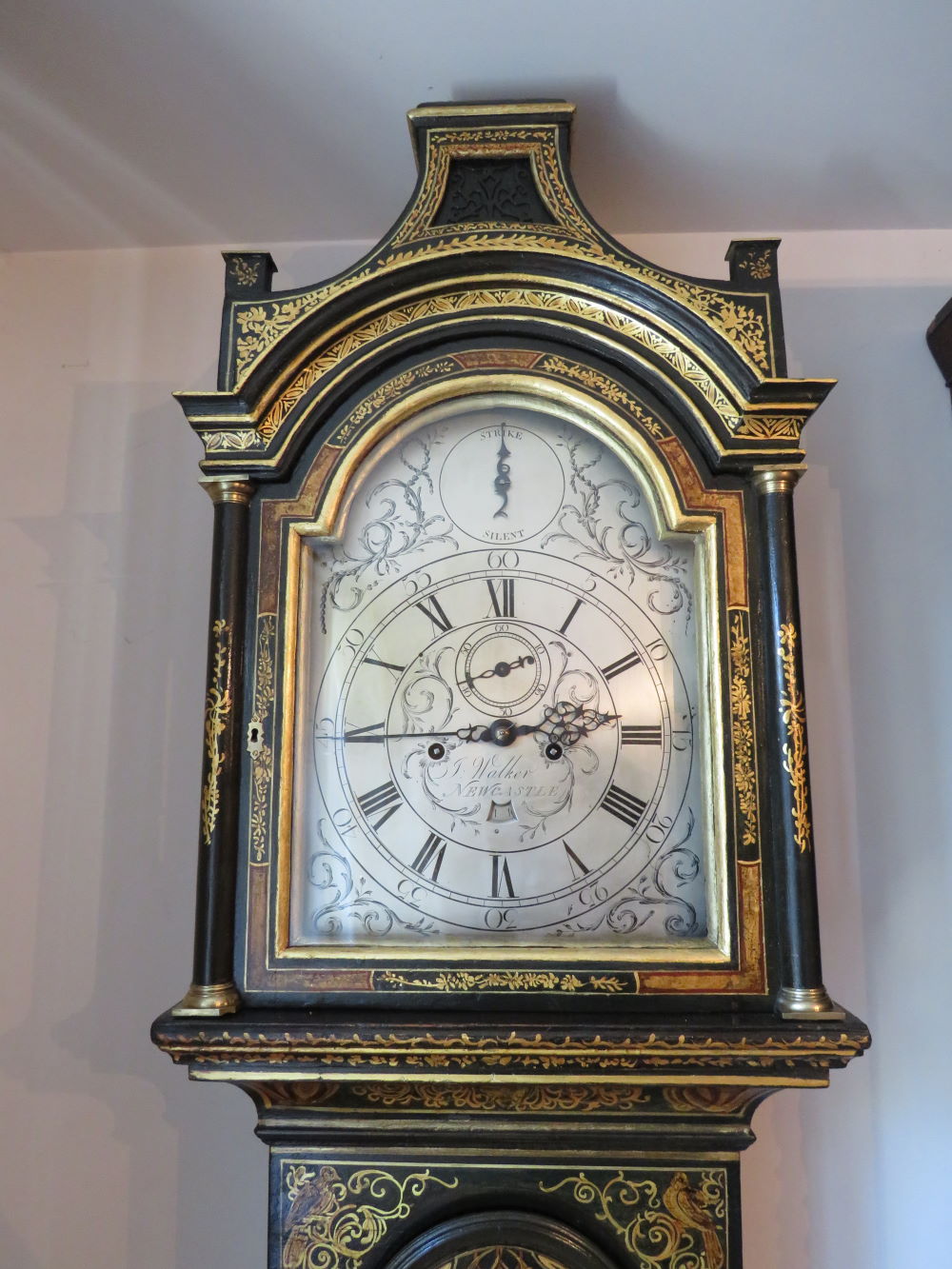 In the next photograph you can see the japanned clock now complete after fairly intensive restoration gold work and Japanning has been finished.

The second picture below shows a closer view of the marquetry on this fine antique longcase clock trunk. When it arrived at our workshop, the door was broken into three pieces, and most of the marquetry work was missing. 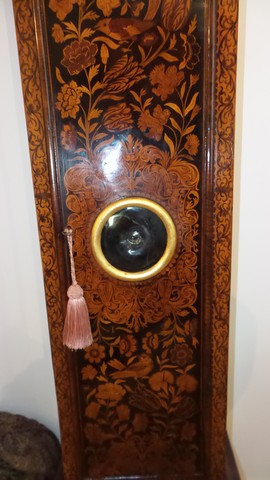 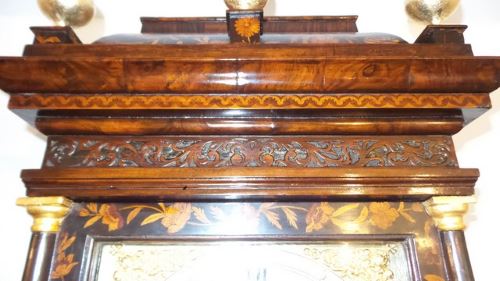 The picture of the hood shows displays all the detail one might expect of an incredibly fine antique clock hood. All mouldings had to be removed and relaid, as the timber of this period was laid vertically, rather than horizontally. It is also known that walnut tends to cup, therefore making it loose on the carcass.

At Green and Cockburn office we undertake very much the same sort of business that is undertaken at our main workshop.
In the photograph you can see a very fine Dutch marquetry long case clock.

Clocks of this nature with English walnut cases and fine Dutch marquetry were made in the 17th century around 1680 into the William and Mary period.
These movements in these clocks had what's known as a count wheel strike, rather than what is later and used today which is the rack strike.

The marquetry on these clocks is particularly fine using timbers such as Laburnum ebony and wild and wonderful country woods not much mahogany of course because mahogany was not yet widely used in the country because this was acquired after the Armada when we were at war with the Spanish.

This was of course in 1588 and mahogany started to be used very slowly in furniture and clock cases much later on, the earliest mahogany to be used on clocks was called Cuban mahogany as was the mahogany in the ships of the Armada and it is very hard and dense.
When working on it it can blunt your tools,

In the past, 30 hour longcase clocks were not so much of a staple as they are today but have since become admired for their original parts. Unlike many other styles of clocks, they have passed through the generations mostly untampered with. For us as antique clock restorers, we thoroughly enjoy working on a clock that may not have been changed since the day it left the original maker's workshop.

Most 30 hour clocks have a count wheel strike which predates the rack strike as seen in most longcase clocks predating 1740.

After intense restoration in the workshop this movement is now looking wonderfully clean.

as the verdigris damage has gone too far. In the next picture you can see the movement after restoration has been undertaken 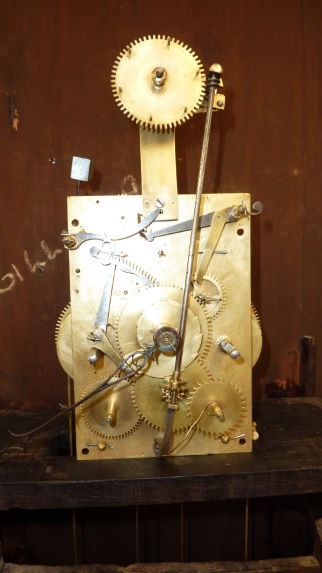 This is a picture of a period walnut longcase clock hood circa 1690 after our restoration. 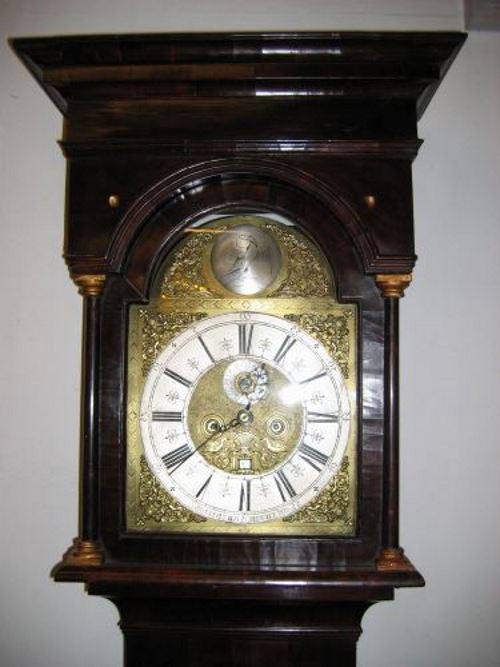 We also pride ourselves on our dial painting as the methods we use are original to the dial itself. On the left is an exanple before restoration on the right after our restoration. 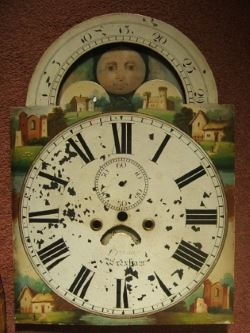 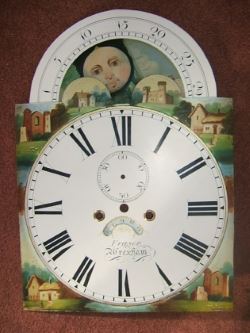 Please contact us for a free appraisal of your restoration work - contact Malcolm Green on …
Tel : 01462 790646 or E-mail : Malcolm Green