As part of Green & Cockburn's vast antique restoration expertise, we are able to undertake gilding in oil and water on gesso and clay. We also undertake the restoration of clock cases and metal items by using the traditional skills of fire and mercury gilding.

We have recently restored two pier mirrors (circa 1690). These two mirrors came into our workshop in an absolutely appalling condition. The gold had deteriorated to such a degree that it was hard to tell the gold from the later painted bronze finish, which had been applied during the Victorian period.

Below you can see the two mirrors in question. The mirror on the left was missing the gesso decoration at the bottom, and the one on the right has sections of gold and gesso missing from the round spears on either side. Both mirrors were in dire need of restoration as most of the gesso was loose. Below, on the right, you can see a photograph of the two finished gilded pier mirrors. 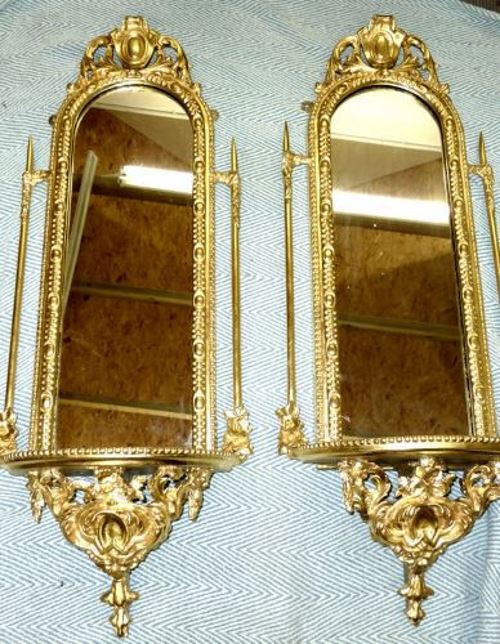 To restore these mirrors:

Below, you can see an image of one side a mirror after the gilding process had been completed. Both mirrors spears have been repaired and finished. 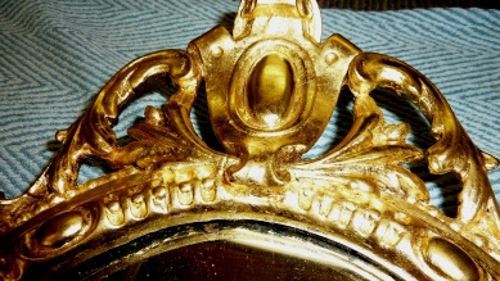 You can see the fine detail on one of the crests after restoration work. The completed item should look as though it has been carved from solid gold.

We can also gild by using electroplating process as you can see below these items were gilded using this process, they were originally gilded using Mercury which was called fire gilding but unfortunately these days we are not allowed undertake that method.

The Photograph on the left an 18th-century quill holder

And the right you can see two Georgian gilded lion candleholders. 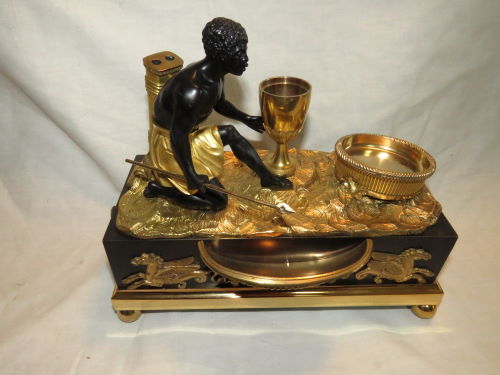 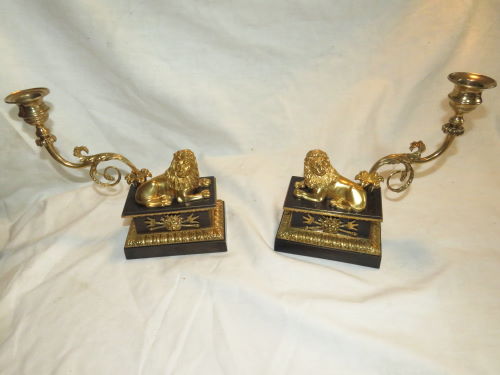 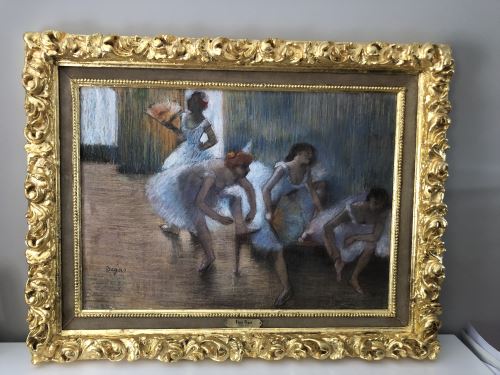 At Green and Cockburn Antique Restoration we undertake gilding of many sorts.
We also undertake water and oil picture restoration in the image above one can see the finished water gilded frame which was in an absolutely appalling condition, this frame is housing a study by Degas
Both of these items required restoration, the frame having many faceted areas of acanthus leaf .

The frame was first repaired which was initially in pieces the broken acanthus was repaired with compo which is a moulding compound as used originally, gesso made from whiting was then added to the frame then red clay was used to cover the frame, then 23 carat gold leaf was laid using rabbit skin glue.

This gold was then burnished to a high shine and aged according to the client's requirements.
The Degas artwork was restored using original pigments as per the original process.

Restoration of this sort is very expensive therefore the item in question has to be worth it, meaning that the money has to be within the item itself rather than just having the item restored because you like it, as the gold used in the restoration of this frame cost £800 then of course one has to account for the Labour.

We also undertake gilding by electroplating method on metals as Mercury gilding is no longer allowed.

Gilded objects such as an antique mirror or picture frame are damaged relatively easily if they are knocked. Gilding can also discolour and wear over time.

Our workshop is fully equipped for oil or water gilding and restoration using traditional methods and materials.

We also undertake gilding of metal surfaces, many of these surfaces were originally fire gilded using Mercury

Whilst we can restore pieces using mercury, it is preferable to use the similar process of electroplating.

Below you can see some of our recent gilding of a fine French Ormolu clock.

This clock came into our workshop in a distressed state. The once missing wing on the butterfly has been remade by lost wax casting and then replaced, the clock has been gilded too. 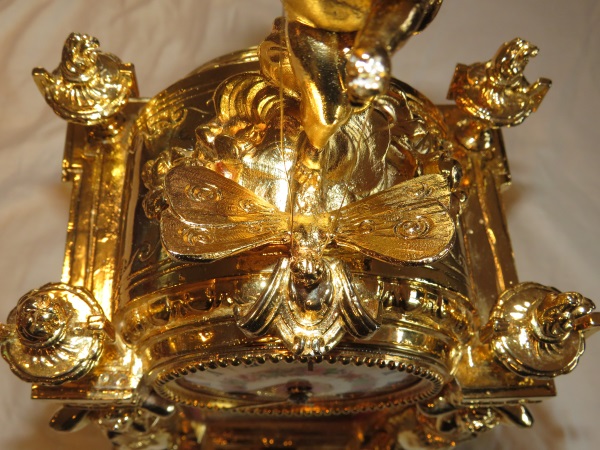 Antique furniture and clocks often include decorative carving, and it is these parts that suffer from wear and tear the most.
We at Green & Cockburn restore damaged areas by carving onto replacement timber to restore the piece's original look and feel. We carry out relief and incised carving to the highest standard.

We pride ourselves in what we call invisible repairs which remain undetectable even to the expert eye. We also ensure that the original design and concept of the piece remains intact.

We were recently asked to restore a particularly fine but damaged, French 17th-century cushion mirror.

These mirrors are generally composed of a wooden background, where sections of mirrored glass are laid with highly intricate mouldings and carvings. In this particular case the mirror had pressed floral work made from brass which had then been gilded.

As you can see, the mirror was in a distressed state. Missing sections of the floral corner patterns can be seen.

Below is a picture of the original floral pattern which was broken in various places. 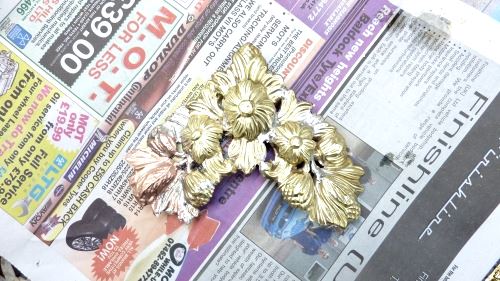 These floral sections were made by compressing copper over a carved oak substrate, and then attached to the main body of the item. This was done with lead as per the original process.

The moulding is made from ebony which is profoundly difficult to work with. If you look at the moulding carefully, you can see that it has horizontal and vertical cut lines interposing one another. This makes it tricky and quite difficult to reproduce.

You can also see the condition of the original brass work, and a corner of where the missing gilded floral work should be.

Below you can see images of the fully restored mirror. 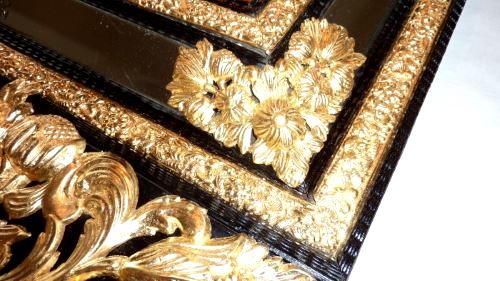 The mirror restoration is complete. The missing gilded sections have been remade and parts of the ebony moulding have been restored.

Below you can see the detail involved in the manufacturer of one of the corner mounts. 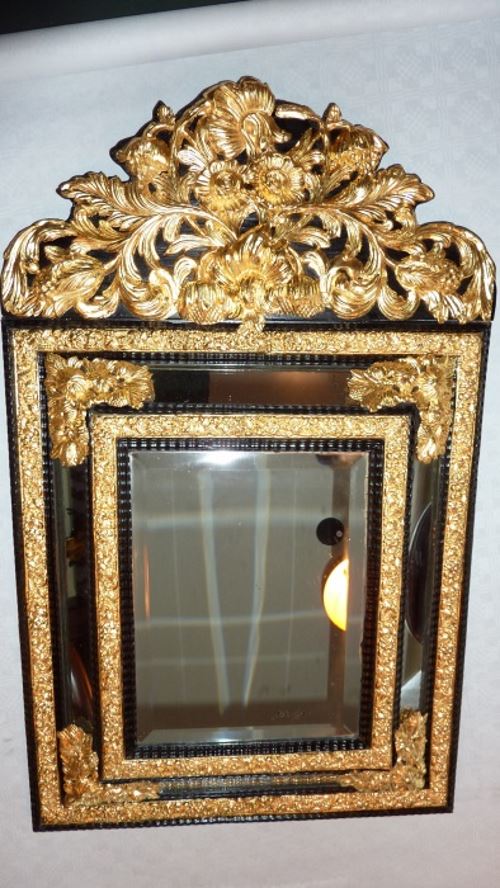 This fine frame came into our workshop damaged and broken as it had fallen from the wall. 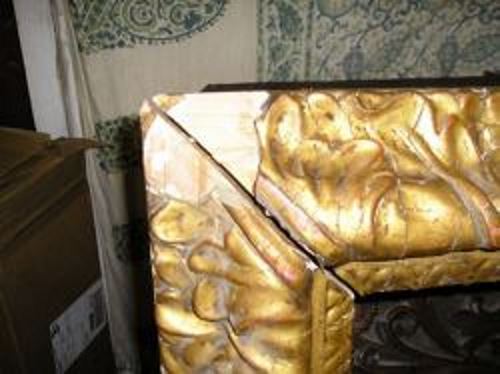 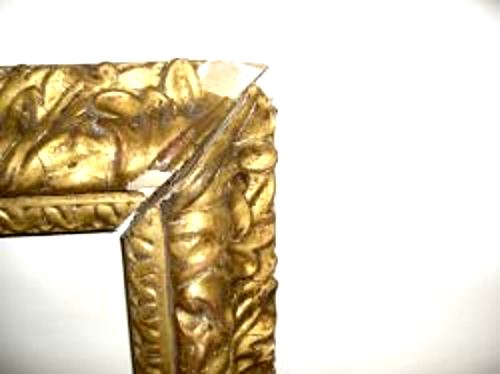 Below you can see some sections of the newly gilded frame. 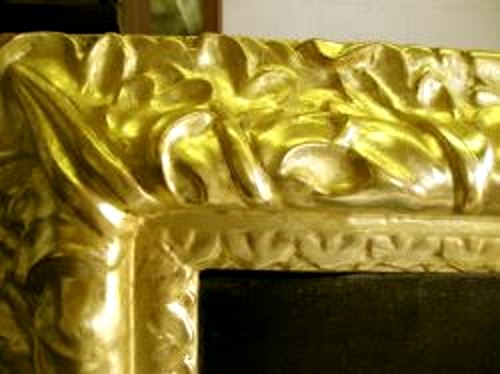 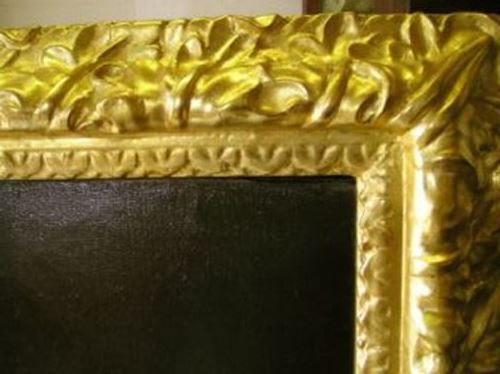 Here are two rather fine 17th-century pier glasses with fitted candle sconces. The gilding on these frames were worn overtime. There were many splits and sections of the gilding that were missing.

Below you can see pictures of the pier glasses prior to restoration. 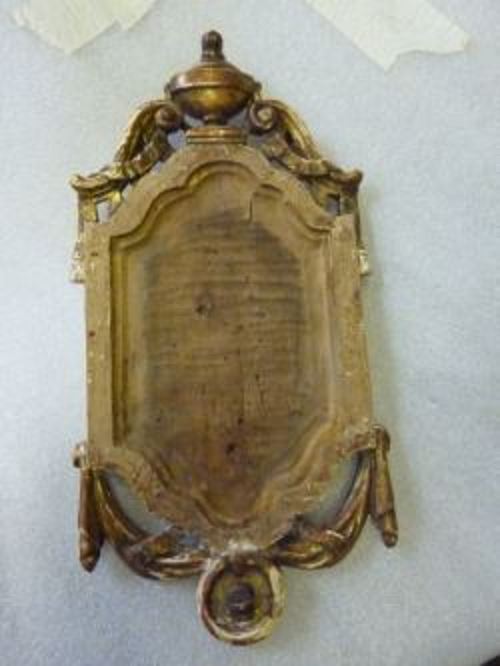 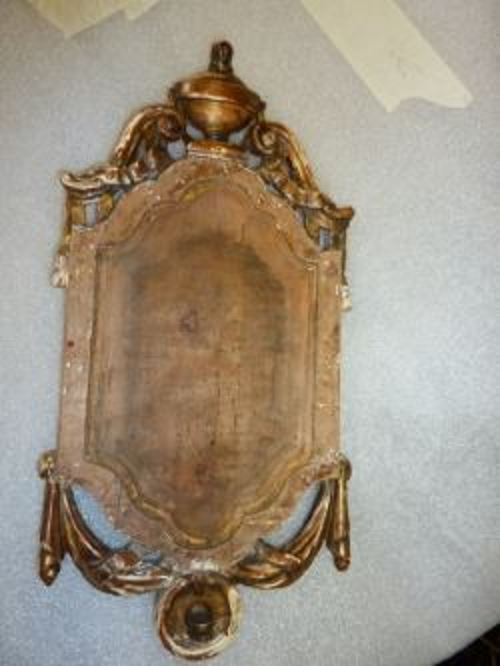 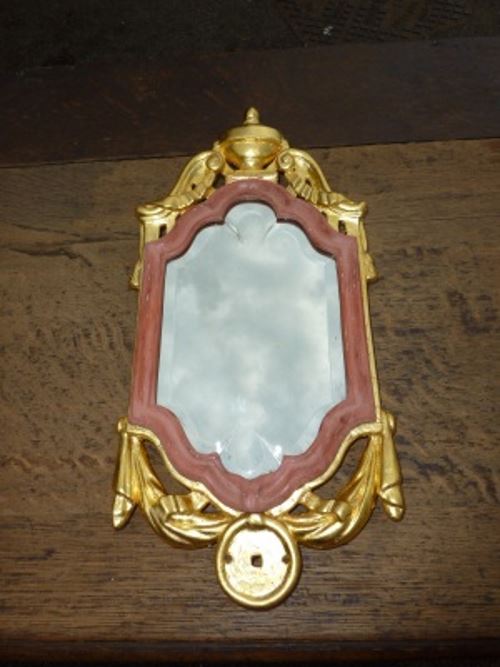 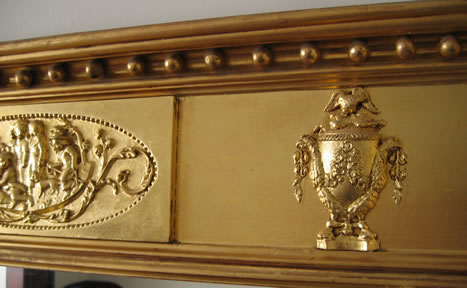 We would be more than happy to show you examples of our gilding and carving work on antique furniture on request.