This fine and valuable longcase clock had received quite a lot of damage in its life from woodworm and dry rot. Unfortunately, this is a common issue in antique clocks and furniture from this period. 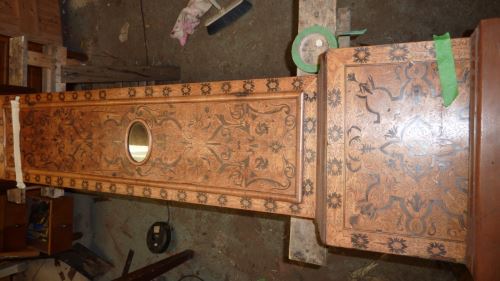 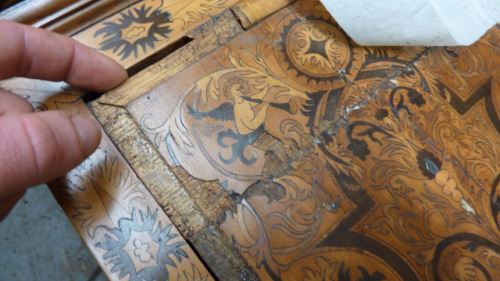 The clock had exceptionally fine marquetry work, but the original timber it had been laid into was rotten. Therefore, the marquetry needed to be removed and relaid onto a solid wooden base.

The base timber we used to restore the clock was of the same period, usually pine or oak at this time. Below, you can see a section at the top of the door, (such doors of this period were cleated). This is where the timber along the top of the door was placed horizontally, onto the vertical grain, and then veneered. Over time cracks appear. The angels feet and delicate foliage were missing from the marquetry work. They would be replaced using only contemporary timbers of the period. In this case it would be boxwood, ebony, laburnum and holly.

In the photographs below, you can see evidence of the rot. The base of the clock had to be totally dissembled, reglued and veneered. 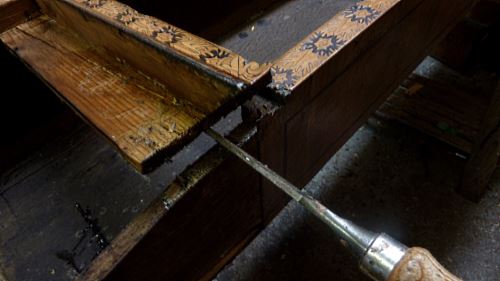 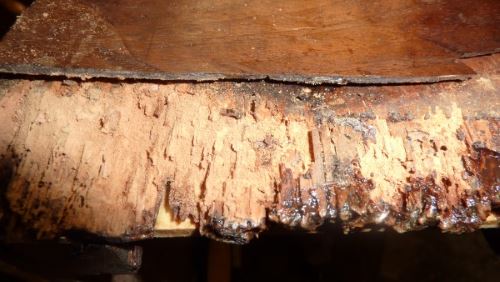 This clock had fallen off of the wall and had bounced a couple of times causing extreme damage.
We were instructed to restore the clock back to its original state. This involved re-gluing broken parts using animal glue, remaking any broken brass parts and replacing the veneer.
The movement required a complete overhaul as the shafts and wheels were broken and bent. The convex glass was broken too.

Before and After Restoration 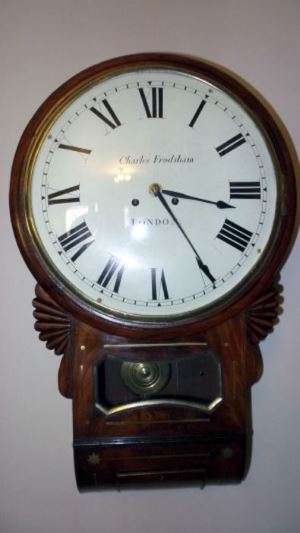 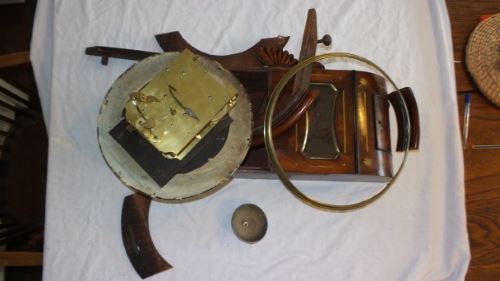 The clock required fairly intensive repairs to the movement. The bezel was bent and the glass, along with the case, was broken. The client had phoned us in a rather distressed state asking if this was at all doable. As you can see here, the restoration was completed without any signs of its previous state.

The movement and the case was restored using only original veneers and materials, and the brass inlay (which was missing prior to the accident), was replaced. The dial which had become dented and chipped was stripped and repainted.

The client was so pleased, they said that the clock looked far better after restoration than before the accident.

A Dutch Marquetry Longcase Clock circa 1680 After Restoration

This very fine Dutch marquetry longcase circa 1680 came into our workshop in an appalling condition.
Below, you can see the photographs of the clock after restoration. 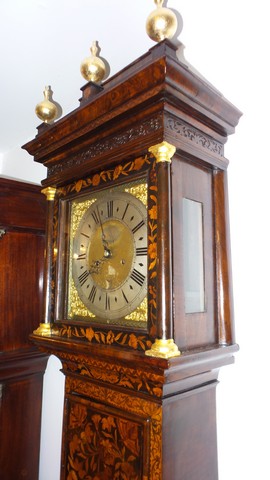 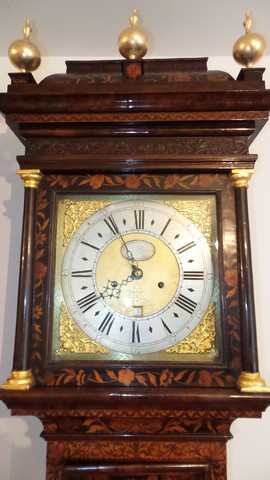 Here is a rare trace of an early marquetry repair on a Dutch marquetry longcase clock from 1864. They had put newspaper under the veneer to take up the thickness. 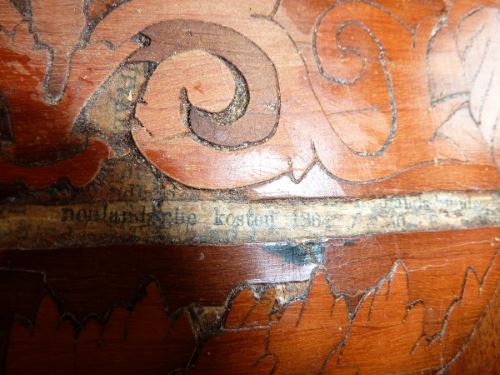 You can see photographs of the frets, both broken and once they had been inserted into the hood after restoration. 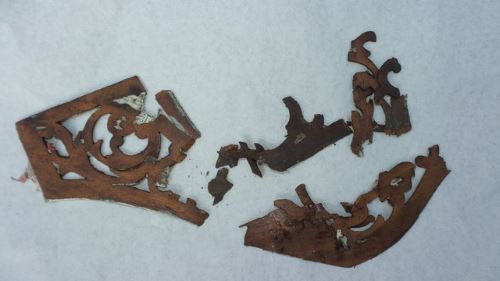 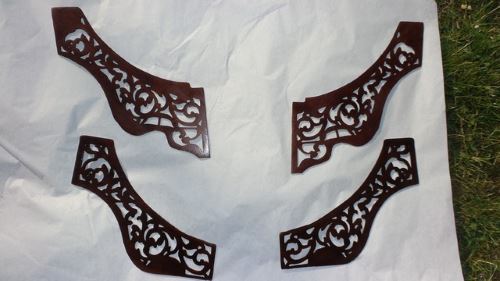 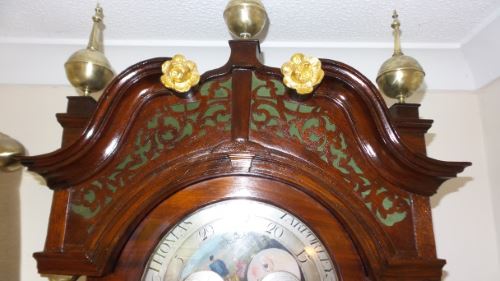 Dutch Marquetry Walnut Clock Base circa 1680

This fine antique longcase clock, circa 1680 in Dutch marquetry and walnut, came into our workshop in a terrible condition. The marquetry was loose, and the base had been so badly repaired that we had to renew all walnut veneer. The bun feet were missing completely, and a restorer in the 1800s had removed them and added bracket feet.
There are a profuse amount of timbers included in the making of marquetry clocks. This clock for example, contains boxwood, ebony, tulip wood, laburnum, cedar and maple. 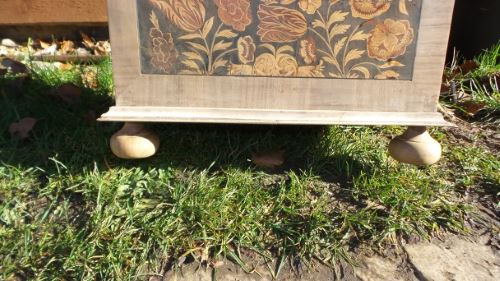 Above, you can see a picture of the base, which had been scratch moulded. The replacement bun feet are now in keeping with the original concept and design.

A Boulle clock with a Damaged Bezel

Here you can see a fine example of an early 19th Boulle mantel clock with a French movement.
These clock cases were made using turtle shell and brass. The brass was inlaid into the turtle shell and vice versa. They used fine French movements in this period, including an external count wheel. This particular clock had suffered damage and the bezel had been bent. These bezels are near impossible to reshape without the help of a professional restorer as they will invariably break. 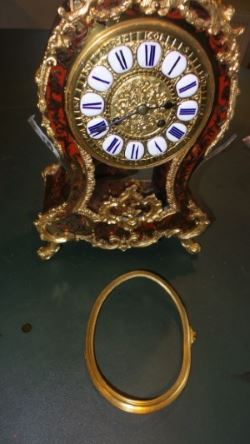 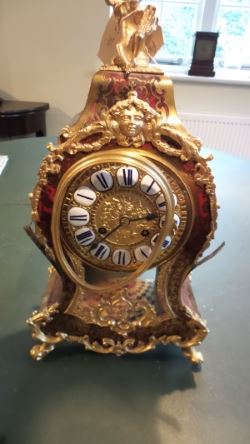 William and Mary Chest of Drawers

This fine chest of drawers was acquired by our client at auction. The chest had been used in a clay potter's studio to store clay on. The clay which was stored in the drawers had caused warping overtime, and the veneer was lifting. The original turned bun feet were also missing.

Furniture of this period was commonly made out of walnut with herringbone bandings. This style of banding was made from walnut. A straight grain cut at 45 degrees was made, then inlaid at 45 degrees to one another, and laid along the edge of each drawer.

This chest of drawers had most of its herringbone banding missing. We replaced this, and had four new bun feet turned and replaced. The majority of the missing mouldings have been made out of walnut contemporary to the period. 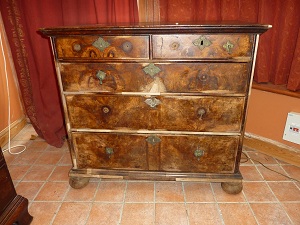 You can see that some veneer had been restored prior to us receiving the item. Some of the herringbone banding on the drawers had been repaired, and small sections of the moulding along the base. These repairs appear to be whiter than the rest of the carcass as shown above.

Most of the original drops, back plates and escutcheons were missing. You can see a photograph of one of the drawers with its original brasses to be used in moulds for copies. 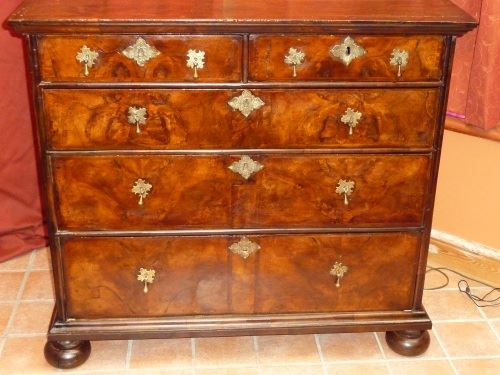 This William and Mary chest has been completely restored using walnut contemporary to the period (circa 1690). The handles from the original drawer have been copied using the loss wax principle.

The client acquired this chest before restoration for £750. After restoration, the insurance replacement of a chest in this restored condition is somewhere in the region of £6000.

Please contact us for a free appraisal of your restoration work - contact Green and Cockburn on …
Tel : 01462 790646 or E-mail : enquiries@greenrestoration.co.uk